Let our years of experience help you stay warm...

Contact us now to see how we can help.

Sign up and we'll get right back to you.

Seager Home Solutions was contacted by the private householder living in Ipswich, Suffolk to complete an initial survey of their heating system following many years of problems and recent issues. Their system had been installed twelve years ago and for the last ten years and with the assistance of many other companies, the client had been trying to get to the bottom of the intermittent problems.

Unfortunately, and following many visits from heating specialists, they had been unable to resolve the issues and so our surveyor and heating specialist were determined to help the client get to the bottom of it.

Following a review of the boiler and piping system, and from discussing the long list of problems with the client, it was becoming clearer that the boiler had never actually operated at its proper level, and in addition, when the boiler was installed 12 years ago it was moved and parts of the concealed piping had been incorrectly fitted. Due to this piping error and leakage from the boiler the client decided to replace the boiler and to have the piping issue resolved.

A new high efficiency wall hung Worcester Bosch condensing boiler system was installed and we also upgraded the controls and installed a new hot water cylinder. The result is an extremely efficient and reliable heating system, with the added benefit of a two year warranty on the boiler.

The client was delighted and commented, “Having had several different companies through the door to look at this problem all without success it was very refreshing to experience the Seager approach. Their surveyor did not beat about the bush and confidently predicted that although it might not be straight forward due to the concealed nature of pipework, that they would be able to fix the problem. They certainly have.” 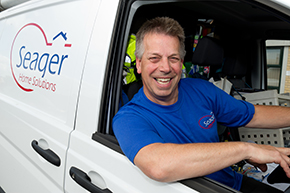 Service with a smile. Call us – We’re here to help.

Just a quick note to thank you for sending Jason to do my wet-room; he had an awful job but he kept his cool and was always very polite and went that extra step further. he is...