Build A School In Gambia Visit

The team left Gatwick for The Gambia at 09.30 on Tuesday 23rd  July. The members of the group included Trustee’s Julie, Helen, her mother Dianna, Billy who helped with the original build, his partner Christa and myself, Alan Seager. More than our usual quota of baggage saw us fully loaded with school and admin equip along with many donated items such as children’s underwear and socks etc.

An uneventful flight saw the team arrive at Gambia at 15.00 local time and straight into the throng of native porters, it being off season there were far too many for a small amount of passengers! The first small hiccup, I was stopped and questioned for several minutes about the hanging files and folders one of my bags was fully laden with. Gambian customs were wanting to charge import duty on donated equip for which there was no real value attached. After a meeting with the man in charge they eventually agreed I was not about to start a stationary business and let me continue.

We were greeted by our usual driver, Jordan with a second vehicle required due to the additional team members and luggage. After a short trip with one stop for money exchange, we arrived at our hotel for 17.00. We had a quick meeting to discuss our itinerary for the following day and then it was dinner and off to bed.

The heat was stifling and although it was only 30 degrees and similar to the temperature we left in the UK, the humidity was almost unbearable…… Eventually we got to the school at Sukuta around midday for discussions with head teacher, Mrs Jallow. These lasted for over two hours and many things were spoken about including, child and teacher performance, new year objectives, equipment requirements and teacher/employee appraisals. A wish list of equipment was drawn up and I asked Mrs Jallow to obtain local costs for the same, after which he would consider for signing off and authorise the purchases.  Final preparations were made for the end of term party planned for the following day and the appraisals to be held on Friday. The team then departed for a meeting with Ossainou Drammeh, Principle at the SOS School’s project in Bakoteh. He has helped the team since day one with the project, guiding us through school registration, teacher training, employee COS etc.. He is also our local agent and cheque book holder. At 18.30 the team returned to the hotel for a de-brief, dinner and bed – it was a very successful day. 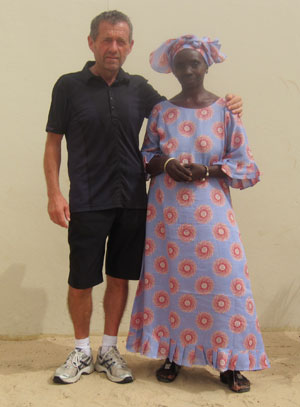 Following a relatively leisurely morning except for a bit of report writing, the team set off for the school end of term party arriving about 13.00 to find preparations were in full flow. Not being an official school day, the children having finished term the day before, Mrs Jallow and her teachers were still awaiting the arrival of the last children. Proceedings started around 14.00 with a series of short plays cleverly designed for the children to enjoy, and at the same time demonstrate what they had learned during the school year.

Everyone involved enjoyed a special day, culminating with a buffet lunch, then finally with the team handing out individual reports and gifts of donated clothing to each child.

Today was teacher appraisal day and the team wondered what might come out of individual one to one sessions given it was the end of the first full year for both employer/employee at the new school. Given none of the staff involved had a proper job some 12 months earlier, the team were intrigued at the slight change in attitude from prospective employee to semi experienced, the demands they now felt could be made to an organisation raising funds in another country were quite amazing, how quickly perceptions can change! The team quickly laid that one to rest with, its tough to raise funds, we need to consider wages first, the children etc etc. Generally though it was felt the one on ones were a good way to get feedback and the team came away comfortable with the fact that things were going much better than expected. It was clearly evident that everyone was working as part of a team. Even Philimen the cleaner had been doubling up as teaching assistant to Miss Sambou, at the same time keeping children and the school immaculately clean. Following appraisals, more discussions were held regarding the additional equipment requests which it was agreed would be firmed up on Mon 29 before the team departed for UK.

Today was a day for looking at other possible future projects as well as visiting an old friend at his family compound. The team left soon after breakfast to visit the Compound of Miss Jallow, our head teacher. Some time before she started work with BASIG she had run a modest nursery for children near her home but just over a year ago it had been closed down following an inspection from the education department. She was advised various improvements would have to be made before she could be allowed to continue fully operating the nursery, although they had allowed restricted use pending improvements. It was during a visit last year when Alan and Martin were made aware of Mrs Jallows plight they agreed, subject to funds being available that they may be able to help. The purpose of the visit was to establish what exactly was required and to obtain prices for the work. In attendance were Baboucarr, the painter and his colleague Ousman, the tiler and plasterer. The work required was to tile the floor throughout, including some balconies and part of the yard, and also replace 3 ceilings, followed by a complete redecoration inside and out. Once complete, Mrs Jallow intended to take evening lessons there whilst continuing to headmistress at our school in Sukuta, her relations would teach during the day. Our charity objective to educate as many children as possible continues!

Moving on, we continued to a friends compound in Lamin, a small village on the outskirts of Serrakunda. We originally met Ebrima at the airport a couple of years ago, a very friendly chap who had obviously been afflicted by Polio at some stage having lost the use of both legs and being wheelchair bound, but always smiling. His accommodation is very basic and it was during a visit last year that I agreed to help Ebrima fund a replacement roof on his family home. Todays visit was to measure up and obtain costs from Eric Whitehead, our original school builder. We had taken with us many groceries and provisions so Ebrima and his family were very pleased to see us and were as hospitable as ever, it is a very humbling experience to be invited and one I would advise everyone to go through at least once. It makes one wonder why we ever worry about no hot water, no heating, no TV etc etc etc.

We stayed with Ebrima for an hour or so then had to move to our next port of call, the Caledonian Nursery School at Brufut. This, as with Mrs Jallows nursery could be another future project for BASIG if and when funds ever permit. I was asked to visit here by a lady called Sue Ingram who lives in the UK and had visited Brufut herself during a stay at the Sheraton Hotel just 5 mins away. She had said she wanted to help but was unsure of their situation ie was it bonafide, was it being correctly run etc. On arrival I was met by Lamin Jatta, the head teacher. He explained that although they had 4 classrooms, 150 nursery age children and owned the property, that they were struggling with overheads and administration and were in desperate need of help. Following a short tour, taking some photographs and a Q&A session, I said I would report back to Sue in the UK and then let him know whether assistance might be available. Although not mentioning to Lamin at the time, I thought about the possibilities of BASIG becoming involved with the project; there are no huge start up costs as the classrooms are already in place and land purchased, no huge salary aspirations for 4 teachers as they are currently on very low wages, and there would be an instant impact improving the education for 150 children… For definite, an agenda item for next months AGM. We said our goodbye’s to Lamin and headed back to base at Fajara with much to debate.

Day 5 and being Sunday was to be a day of rest. However, Eric Whitehead having got wind of our intentions to maybe become involved in another project thought we might be interested to purchase a cheap plot of land near Brikama. The rest of the team decided to stay at base, quite wise as it turned out, as Eric’s short trip turned out to be an hour each way, which was quite interesting albeit tiring in the sweltering heat. The plot of land, although huge in size, some 100m x 100m, would have fitted a multi classroom school big enough for some 600 children but was just in the wrong place. There was not a huge catchment in terms of available children and difficult logistically for the BASIG team to manage, a non-starter unfortunately. We delivered a pleasant thank you to Eric and then back to base to write up revised employee COS and review appraisals, then ready for dinner and bed ……… Some day of rest!

While the team went to visit Jordan, our drivers compound and that of our other local team member Baboucarr (painter), I stayed back to complete teacher COS and update the website. This being our last full day we had to pay a final visit to Mrs Jallow to obtain signatures and hand out employee appraisals. She then passed me quotations for those requested items on her wish list. Some were agreed there and then but other more expensive items would be the subject of a review and approval at the UK AGM in two weeks. A few more photographs, some sad goodbyes and it was off to see Mr Drammeh for the last time. Mr Drammeh had covered a lot of ground during our visit this time, having helped with a banking matter, guidance on teacher appraisals and assistance with the COS. All in all an invaluable local agent, and without his help the project would never have got off the ground. Final discussions were held in respect of the equipment and uniforms that needed to be purchased, and again after sad goodbye’s we departed back to base.

Final visits to the compound of Jordan and his family, then sad goodbye’s to him and Baboucarr before departing to the airport and the flight home. All in all a very successful trip with almost all objectives met and much to report back when we have our AGM in two weeks.

For more information about this charity please visit the Build A School in Gambia website at http://www.buildaschoolingambia.org.uk/

My Husband and I would like to say a very big thank you to your company and in particular Andy Thorne for the way he treated our good friend and neighbour, Vera. She is very frail and...